Red Rock is committed to breed rams and ewes that are hardy and can adapt to different climates and different feed conditions. Here in South Australia we have long hot dry summers and cold frosty winters. We lamb twice a year, from October through to November in 2006 and then mated again in February for lambing in August. No mater how diverse the conditions, the ewes adapt and the lambs survive and grow on.

Red Rock is located in the Upper South East of South Australia in an area know as the Little Desert. Our average rain fall is 16 – 18 inches. Keith is ideally positioned on the main Adelaide to Melbourne Dukes Highway. Less than three hours drive from Adelaide and five hours from Melbourne.

The country is heavy red with lime stone rocks with scattered gum trees and white and red mallee.

Brad and Tanya have been involved in breeding White Dorpers ever since the introduction of the first embryos at Edson White Dorpers in 1997. 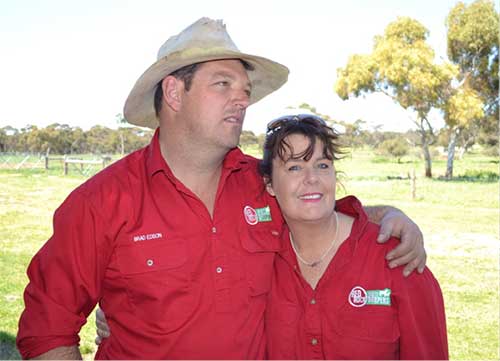 In 2003 ‘Red Rock White Dorpers’ was established with the flushing of 8 type 5 and type 4 stud ewes which resulted in 22 rams and 13 ewes.

These 13 ewes have been the base for Red Rock genetics. Every year we have our ewes classed by a South African Classer and only flush from the top 5%.

Red Rock buys Castlereagh Stud in its entirety prior to Auction. With the popularity of the white dorpers and the demand for quality rams the principles of Red Rock White Dorpers, Brad and Tanya Edson decided to change their focus from breeding commercial ewes and lambs to going solely stud with the purchase of the the Castlereagh Stud. We have always admired the Castlereagh rams on show at Dubbo.

Brad felt it was an opportunity that could not be missed, as the ewes were a beautiful line. "we decided to purchase the stud as Tanya and I have decided to sell off our commercial dorper enterprise and concentrate on producing more rams for our clients at a completive rate" Brad said.

These ewes will also give us the opportunity to also widen the range of the type of rams we will produce. " We where looking to extend the size of our existing stud which would have meant extensive flushing of the top 10% of our flock. "By purchasing the Castlereagh Stud we not only have new genetics but we have purchased proven ewes."
The ewes arrived at Red rock in March. We have had a very successful and busy lambing and the lambs are growing well.

All rams will have lamb plan figures and muscled scanned.